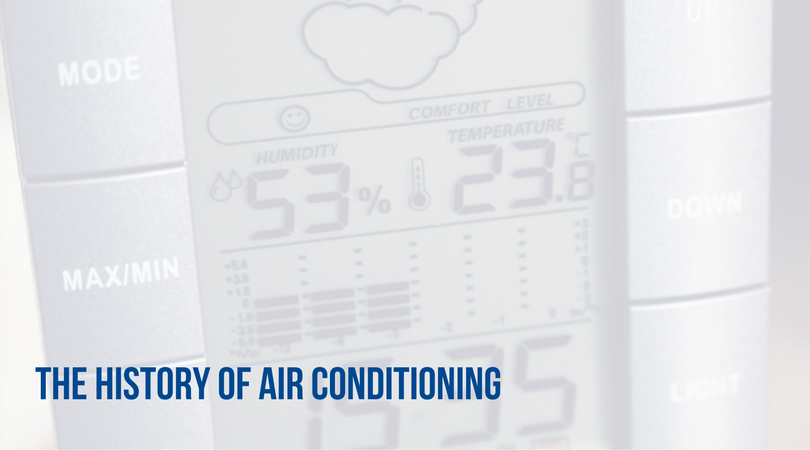 There’s always at least one time each summer: you walk inside and are relieved to feel the cool, refreshing feeling of your home on a particularly hot day and think, “What did people do before air conditioning?!”

Well, we’re going to tell you…

Having the luxury of air conditioning is an incredible thing in the summertime—but that wasn’t the case for those who lived in prehistoric times. When it was hot, people were miserably uncomfortable, and they’d go to great lengths to try and cool off.

During the 17th century, people would use ice and snow for cooling. They would harvest ice in the winter and store it for use in the summer. As you can imagine, this didn’t always work the best.

Soon after this, Egyptians developed a technique in which they would hang moistened reeds in windows, allowing the outdoor air to pass through the windows and become cool and moist. This is said to have been when the basic concept of air conditioning was actually developed.

To bring the evaporative cooling phase to a close, a Chinese inventor created the first rotary fan for air conditioning (1).

A few key concepts set the foundation for air conditioning, with the help of some incredibly intelligent people. In 1758, John Hadley and Benjamin Franklin figured out that liquids that can evaporate quicker than water can freeze water and cool down other matter. Following this, in the 1830s, John Gorrie discovered a mechanism that blew air across ice in order to cool down the insides of buildings (2). Pretty cool, huh?

The 1900s Bring a Breath of Fresh Air

The very first electrical air conditioning unit was invented by an engineer named Willis Carrier. Working for the Buffalo Forge Company (a lithographing and publishing company), Carrier needed to find a way to fight off the humidity so that their magazine pages would stop wrinkling. After a series of trial and error, Carrier finally developed a mechanism that controlled the heat by using cooling coils, and eventually obtained a patent for his work (2,3).

Later that year, the corporation made strides to develop a new system that utilized a centrifugal chiller with less moving parts. This improved way of cooling made it so that the systems were more reliable and less costly (3).

After AC was implemented in public buildings, it came to homes. Downsizing the cooling systems for use in private homes, a number of innovators offered different cooling solutions.

Key moves were made by General Electric and General Motors, discovering different types of coolants and developing single cooling units. And in 1931, the very first window unit was created by H.H. Schultz and J.Q. Sherman. However, at the time, most people couldn’t afford one (2).

Eventually, window units became more affordable and were the norm for most homes. By the 1960s and 1970s, central air conditioning was making its way into town. Swapping out window units for ductwork, fans, and compressors, central AC was able to evenly distribute air throughout a building or home (2,3).

With the rise of air conditioning use beginning to soar, in 1992, the United States Department of Energy issued conservation standards for manufacturers of residential central air cooling systems and heat pumps.

Since this was issued, AC manufacturers have improved their systems drastically and continue to do so. Comparing modern air conditioners to those built in 1990, they use about 50% less energy than older systems (3).

In 2017, we’re lucky to be able to enjoy efficient, affordable air conditioning. But as you can see, that didn’t happen overnight.

Greater Comfort Is Here to Help

As the #1 HVAC Installation, Repair & Maintenance serving all of Cincinnati, Northern Kentucky & Southeastern Indiana, we know quite a bit about modern AC. Call the experts at Greater Comfort today for all your AC related needs this summer: 859-491-4915.