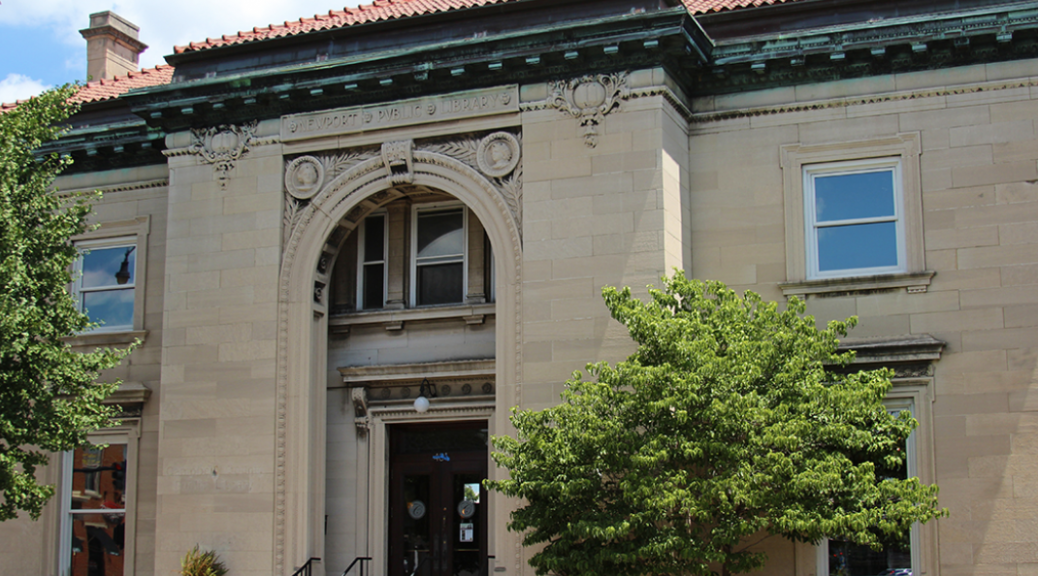 Falling under the umbrella of “The Carnegie” is the Carnegie Galleries, the Eva G. Farris Education Center and the Otto M. Budig Theatre, all housed together under the landmark dome.

For those that are unfamiliar, the Carnegie’s iconic building is located in Covington, Kentucky. It was originally constructed in 1904 as a Carnegie Library. Today, it’s listed on the National Register of Historic Places.

The breath-taking, inspiring building is one of only a few remaining Carnegie Libraries in the United States with a full-scale auditorium, which is just one of the reasons it is so special to our region and nation. The Carnegie’s doors have been open to the Northern Kentucky/Greater Cincinnati community for over three decades. It used to be known as the Northern Kentucky Arts Council, to The Carnegie Visual and Performing Arts Center – and the name was recently shortened to The Carnegie.

As the largest and only multidisciplinary arts venue in Northern Kentucky, The Carnegie connects people with enriching arts education, exceptional theatre and unique gallery exhibitions. Their mission: to provide an extraordinary venue for the arts and arts education, and that’s made possible through the generosity of individuals, private foundations and businesses in our community. Right now, the typical upbeat musicals and stunning intimate dramas—a part of that mission—are on-pause due to COVID-19, but the building is still awe-inspiring and full of rich history.

History Leading Up to the Commercial HVAC Project

The library and theatre continued to thrive through the years leading up to World War II. During the war, the theatre’s original copper roof was removed and sold for scrap. Left exposed to the elements, the theatre suffered significant water damage. The theatre began a gradual decline and in 1958, without the funds to repair it, the library boarded up the theatre.

There was a potential demolition in 1974, when the Covington library moved to a larger facility.  It took a group of interested Covington citizens to save The Carnegie from the wrecking ball—thankfully!

They formed the Northern Kentucky Arts Council, and turned our building into a non-profit community arts center.

The theatre was used infrequently over the ensuing years because of its serious, even dangerous, disrepair.  Over that time, as mentioned above, the name changed from The Northern Kentucky Arts Council to The Carnegie Visual and Performing Arts Center and we continued to develop as a gallery for new and emerging regional artists.  Arts education classes for children were introduced during that time as well.

In 1999, the State of Kentucky, the City of Covington, The Carnegie board and many others, led The Carnegie to its biggest transformation. From this initiative, a connector addition was completed in 2003, linking the galleries with the theatre.

That project sparked the creation in 2004 of a bright and beautiful new classroom space, the Eva G. Farris Education Center.

In 2005, The Carnegie’s signature stained glass interior dome was completely refurbished. The only piece remaining to complete our metamorphosis was the renovation of the theatre. Hundreds of gifts from large to small, as well as hard work from architects, builders and more restored what is now the Otto M. Budig Theatre at The Carnegie. This history gives you just a glimpse of the kinds of renovations that have already happened over the years to maintain the historic building.

As one of the most prominent arts institutions in Northern Kentucky, we were passionate about the opportunity to support a venue right in our backyard.

The challenge: Greater Comfort set out to help modernize the heating and cooling system for The Carnegie to improve comfort, safety, and to overcome energy efficiency challenges. At the same time, we wanted to design a state-of-the-art HVAC solution that would not have any negative impact on the fabric of such a historic venue.

The solution: The solution was both aesthetically pleasing and it also worked to improve the overall HVAC efficiency and performance for the venue. A pressing need was changing out the boiler and HVAC for the rotunda, including new boiler controls. We replaced the previous hot water heater with a high efficiency electric hot water heater, thereby permanently abandoning the chimney, which would also help to prevent further damage from the environments. The new boilers would not only be more efficient and high-performing, but they are believed to be much safer for the venue for a number of reasons.

New supply and return mains were installed into the rotunda building with upgrading piping, among other changes. A second part of the project included outdoor units that were installed on the rooftop. The rooftop units and controls were constructed in a way that would preserve the building’s aesthetic appearance and rich history details, and also help the building become much more energy efficient in its operations.

Turn to Greater Comfort for Your Commercial HVAC Projects

We’re proud to be a veteran-owned business that believes in developing meaningful relationships with our customers, our partners, and other key stakeholders. We also strongly believe in giving back to the community; after all, small businesses can help to raise the quality of life for employees, their families, our communities, and beyond.

When you need to optimize your building or space, and minimize any kind of downtime, Greater Comfort is the team you want to call. Our scalable (but still flexible) solutions are depended upon by customers across a variety of industries and applications.